Almost two years without an update, but never fear, for I have returned with a review for Bocchimusume × Produce-keikaku. (ボッチムスメ×プロデュース計画。) by Kalmia8!
The protagonist Ema Tachibana is quite literally a huge loner without a single friend. Because her intimidating stature and strong facial features draw uncalled attention, she tries to live her life as low-profile as possible. However, her uniqueness catches the eye of Miki Hiraizumi, an aspiring fashion designer declaring he’s found his ultimate muse in Ema. Together with his photographer friend Saitou Shinjou they decide on turning gloomy Ema into a world-famous high fashion model for Miki’s line, but they soon find whipping her uncooperative butt to shape will take more effort than they thought!

As of July 2016, MangaGamer has announced they will be localizing Bocchimusume as Fashioning Little Miss Lonesome. As far as I know, this is the first R-18 otome game officially released in English, so I highly recommend western otome gamers to give Kalmia8 and MangaGamer their support!

The review will contain slight spoilers for the game etc. So, without further ado, レッツボッチ！

First I have to mention that the digital version of the game was released a week before the physical version and with a noticeably lower price, too! This is great for me because:

Other companies, take note! I bought my game from DMM, but they’re selling it over at DLSite as well.
Other things that stuck out to me were Ema’s height; at 173cm I never thought there’d be a heroine who’s exactly as tall as me! In all those self-insert games it feels odd when the guys go all “wow girls are so tiny and fragile” Uhhhh…yeah ;___;
& There’s a button for skipping to next or to the last choice! Usually I tend to see games where it’s only possible to go forward, so this was really nice for getting all the endings faster. The game centers on the three characters’ interactions and and the character routes branch off rather late considering the game’s length is on the short side even for the price. Because of this and the comical nature of the game, it doesn’t feel like a romance game and the best routes for the characters end abruptly. As for the capturable characters, Saitou is the S obsessed with money and Miki is the M character obsessed with clothes, pretty much. There are instances showing the scenario writer would be able to flesh them and make them feel more like human beings, but they end up being wasted. In the end, I think the biggest weakness of the game is the male characters being too over-the-top to be relatable or charming. Not to mention looking at the characters didn’t make me want to play the game for the sex scenes, which is pretty important since this is an eroge after all. I’ll give them kudos for the setting, though, since it’s interesting and lets the characters be something else than instant otome game tropes. The game has a total of 20 endings, most of them being short joke endings. I think my overall favorite endings include one where Ema gathers a fan club full of middle-aged women while working in a cross-dressing butler cafe and one where Ema decides to be a model in Japan using her father’s connections (which means ending up playing dumb on variety shows). Your enjoyment of this game will boil on whether you like the gags; personally I’d say I found them funnier than in most games I’ve played. Playing the trial I wasn’t convinced by the script and almost passed on the full game, but in the end decided to give it a try anyway. The game reads kind of like a very opinionated blog, in a good way. I don’t think I’ve ever seen such a variety of topics in a game’s jokes and as a foreigner it’s always fun to read what the game makers think about the world outside of Japan, as well.

Ema’s intriguing personality got me to try this game and considering how hyper the whole game is, she is a surprisingly reasonable heroine. I mean, they could have just gone and made her a spineless whiner, but instead her worries feel justified and she feels more equal with the guys than the average heroine. Despite being nervous and awkward she still regularly voices her own thoughts and is surprisingly cunning, too! Her character development is simply a joy to watch along the way.
The game’s world is a kind one and they get insane amount of views for their stuff online and work contracts with people like Michael ×ors just like nothing. Actually, I’m happy about that since the game doesn’t have people actively bullying the heroine either, even though with this setting it would have been very easy to slip in. Most importantly, I’m jealous about how Ema has a figure like this, even though she eats nothing but pizza and confectionery breads: 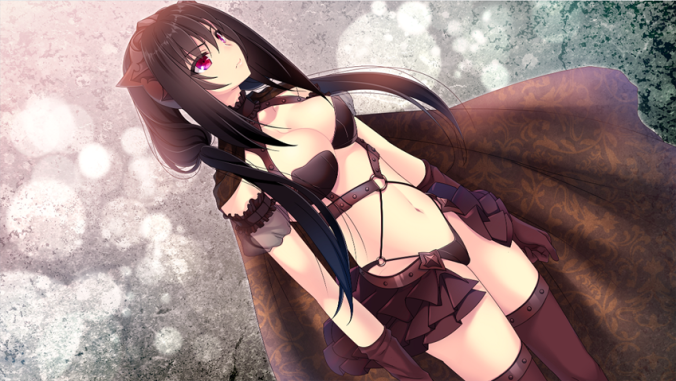 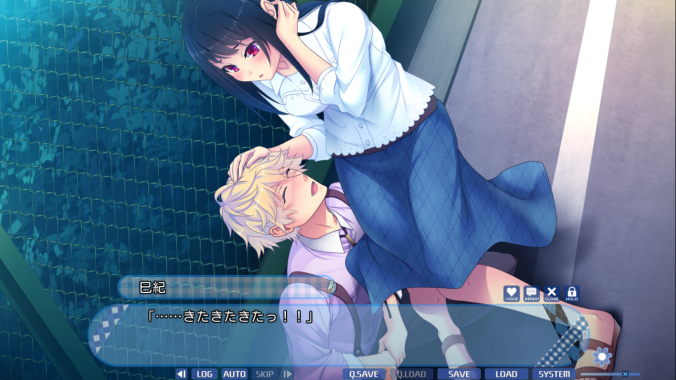 The art is rather amateurish looking, especially during the sex scenes which makes enjoying them difficult when you’re trying to distinguish which body part belongs to which character. They’ve tried to hide using that angle you see on the pictures above, but it ends up making them even weirder. That aside, I’m appreciating the amount of different expressions the characters have (that one Saitou grin had me grinning like him everytime) and Ema’s sharp eyes that look like she has thick cat eye-style eyeliner, being a prominently western make up style makes that a nice detail even if it’s not intentional.

During the break between my posts, I’ve tried A LOT of different otome games, only to be bored to death with every single one. This game is actually the first game I have completed since then (with the exception of Tetrascope’s Sakuya, but I didn’t feel like writing an another review for their games right after WataJuu), so going by that alone, it must have done something right! I’d say I’d recommend this game if you want an unusual heroine in an otome game-like setting. The romance is sparse and doesn’t have much of an impact, but that doesn’t stop the game from being enjoyable in general. Being a half-price title, it’ll go as a light snack game even if you’re about to be crushed by your towering backlog. 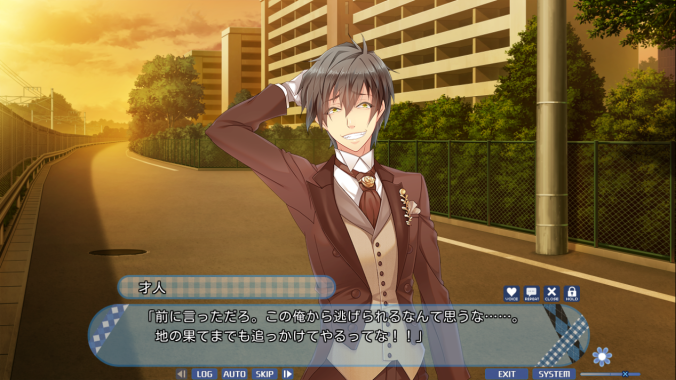 Don’t even think of escaping, because I’ll follow you to the ends of the earth…not because I love you but because your obaasan fan club paid for their yearly membership already! 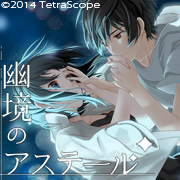